Biography, Facts and Information about Daniel

One of the four great prophets, although he is not once spoken of in the Old Testament as a prophet. His life and prophecies are recorded in the Book of Daniel. He was descended from one of the noble families of Judah (Daniel 1:3), and was probably born in Jerusalem about B.C. 623, during the reign of Josiah.

$IMAGE3At the first deportation of the Jews by Nebuchadnezzar (the kingdom of Israel had come to an end nearly a century before), or immediately after his victory over the Egyptians at the second battle of Carchemish, in the fourth year of the reign of Jehoiakim (B.C. 606), Daniel and other three noble youths were carried off to Babylon, along with part of the vessels of the temple. There he was obliged to enter into the service of the king of Babylon, and in accordance with the custom of the age received the Chaldean name of Belteshazzar, i.e., "prince of Bel," or "Bel protect the king!" His residence in Babylon was very probably in the palace of Nebuchadnezzar, now identified with a mass of shapeless mounds called the Kasr, on the right bank of the river. 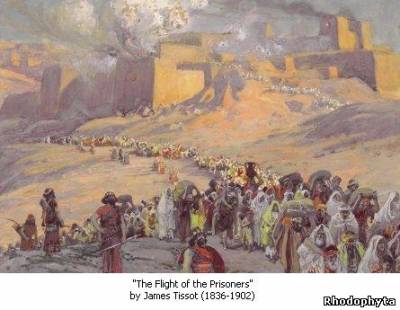 His training in the schools of the wise men in Babylon (Daniel 1:4) was to fit him for service to the empire. He was distinguished during this period for his piety and his stict observance of the Mosaic law (1:8-16), and gained the confidence and esteem of those who were over him. His habit of attention gained during his education in Jerusalem enabled him soon to master the wisdom and learning of the Chaldeans, and even to excel his compeers. 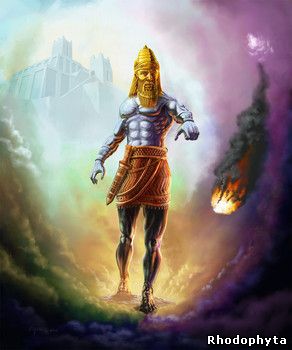 At the close of his three years of discipline and training in the royal schools, Daniel was distinguished for his proficiency in the "wisdom" of his day, and was brought out into public life. He soon became known for his skill in the interpretation of dreams (1:17; 2:14), and rose to the rank of governor of the province of Babylon, and became "chief of the governors" (Chald. Rab-signin) over all the wise men of Babylon. He made known and also interpreted Nebuchadnezzar's dream; and many years afterwards, when he was now an old man, amid the alarm and consternation of the terrible night of Belshazzar's impious feast, he was called in at the instance of the queen-mother (perhaps Nitocris, the daughter of Nebuchadnezzar) to interpret the mysterious handwriting on the wall. He was rewarded with a purple robe and elevation to the rank of "third ruler." The place of "second ruler" was held by Belshazzar as associated with his father, Nabonidus, on the throne (5:16). Daniel interpreted the handwriting, and "in that night was Belshazzar the king of the Chaldeans slain."

After the taking of Babylon, Cyrus, who was now master of all Asia from India to the Dardanelles, placed Darius (q.v.), a Median prince, on the throne, during the two years of whose reign Daniel held the office of first of the "three presidents" of the empire, and was thus practically at the head of affairs, no doubt interesting himself in the prospects of the captive Jews (Daniel 9), whom he had at last the happiness of seeing restored to their own land, although he did not return with them, but remained still in Babylon. His fidelity to God exposed him to persecution, and he was cast into a den of lions, but was miraculously delivered; after which Darius issued a decree enjoining reverence for "the God of Daniel" (6:26). He "prospered in the reign of Darius, and in the reign of Cyrus the Persian," whom he probably greatly influenced in the matter of the decree which put an end to the Captivity (B.C. 536).
He had a series of prophetic visions vouch-safe to him which opened up the prospect of a glorious future for the people of God, and must have imparted peace and gladness to his spirit in his old age as he waited on at his post till the "end of the days." The time and circumstances of his death are not recorded. He probably died at Susa, about eighty-five years of age.
Ezekiel, with whom he was contemporary, mentions him as a pattern of righteousness (14:14,20) and wisdom (28:3).

In many ways the prophecies of Daniel provide the key to the understanding of Bible prophecy in general. How all-embracing they are! They cover an outline of world history, the first and second advents of Jesus, his rejection and the casting off of Israel, later their restoration under Michael their Prince, and the resurrection and restoration of the "many" of mankind. How wonderfully was this saint of God used! Over 2500 years later we rejoice to see what he heard in secret becoming plain and the signs of the soon fulfillment of the glorious things foretold.

One commentator has said that "Daniel’s undeviating integrity as a worshiper of the one God in an alien, dissolute society, as first minister in the first of the world empires, gives him a place among the highest and holiest the world has ever seen."

To be used by God, even in smaller ways, requires that the child of God be separate from the world, single-minded in faith and devotion to his service, of humble mind, diligent in searching the scriptures, instant in prayer. In all these ways Daniel stands out as a shining example. When he stands in his lot at the end of the days what a wonderful guide and standard he will be to the world of mankind, along with all the faithful of old times! These were not offered a heavenly reward, but we are told that they looked for a city which has foundations whose maker and builder is God. How well Daniel will be equipped for service in that everlasting kingdom!

The same faithfulness as that of Daniel is required of us who have been blessed with a heavenly calling. May each of us in our day stand as Daniel did for truth and righteousness.

Dare to be a Daniel,
Dare to stand alone,
Dare to have a purpose true,
Dare to make it known.